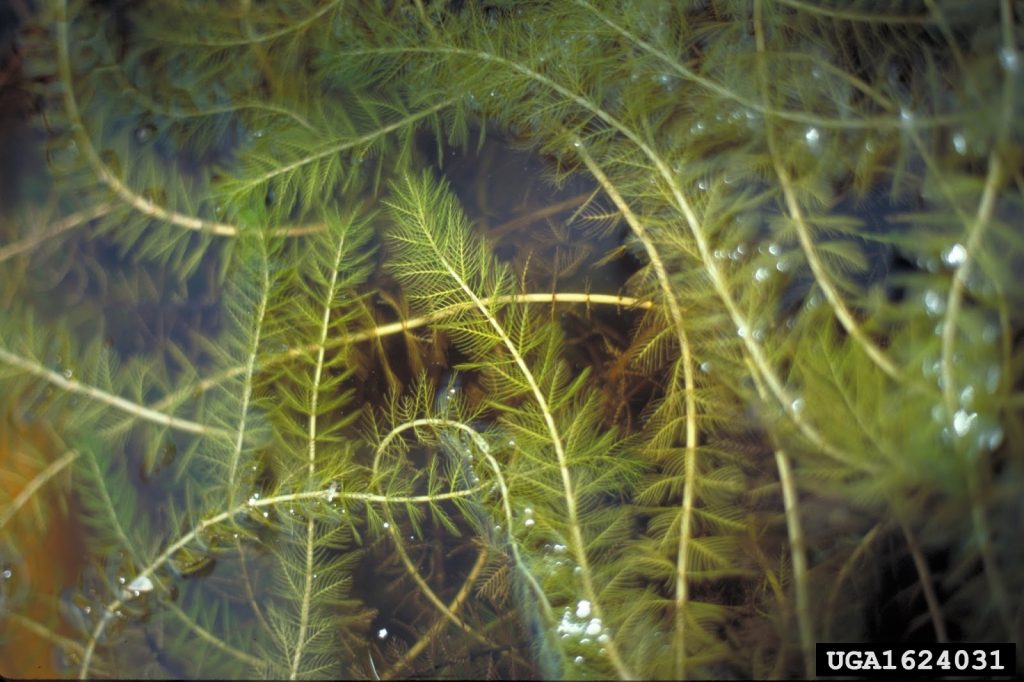 A relatively diverse plant community with a minimum of twenty-two (22) species has been observed in Onota Lake. These twenty-two species include four non-native, invasive species: Eurasian watermilfoil, Curlyleaf Pondweed, European Naiad, and Water Chestnut. Unfortunately, Eurasian watermilfoil and Curlyleaf Pondweed are the dominant species found naturally occurring in the lake.

Eurasian watermilfoil is a non-native, exotic species and has been identified as the primary nuisance species of concern at Onota Lake. Eurasion watermilfoil is documented to grow in dense stands throughout the water column and form surface mats when fully grown. It tends to outcompete the native plant assemblage and become the dominant species. Its dense growth interferes with boating as well as fishing, swimming, and aesthetics. Its negative impact has been controlled in recent years by herbicide applications. Other aquatic plants are also found at nuisance levels in Onota Lake. In particular, Curlyleaf Pondweed can become problematic in the early season before dying down naturally in July but is also controlled by the Eurasian watermilfoil treatments. A pioneer infestation of Water Chestnut was discovered in 2003 in an isolated area of the lake north of Dan Casey Causeway and has been controlled by an aggressive program of hand pulling by LOPA volunteers. Efforts to prevent the introductions of other exotic species are desirable and are continuing to be the focus of the city and LOPA.

Did you know that maximum lake speed is 45 mph?

LOPA is an organization of volunteers. Our mission is to help the City of Pittsfield keep the lake clean and naturally beautiful for generations to come.

Why do a drawdown of the lake?

Lake drawdown is when the City of Pittsfield reduces the water level in the lake. Reasons: Shoreline erosion, weed management, flooding control.

How can I protect the Lake from Zebra Mussels?

Before launching a boat or kayak wash it thoroughly. Learn more about Zebra Mussels.

What You Can Do

Beyond donations, there are many ways you can contribute to the preservation of Onota Lake. Here’s how you can help.

If you enjoy and appreciate Lake Onota, there’s a way you can give back. Becoming a LOPA Member means you support the preservation of this natural splendor.

Our purpose is to assist the City of Pittsfield on all matters regarding Lake Onota. We’re a volunteer organization, providing education and scientific study to help preserve this beautiful place.

LOPA is the voice of Lake Onota, and our members are dedicated to its preservation and restoration.