The Water Quality Committee of LOPA aims to develop a scientific basis for lake management. Toward this end, the committee collects, analyzes, and interprets data regarding the condition and functioning of the lake. This includes various types of chemical, physical, and biological data that can be combined to provide an understanding of the lake’s current condition, trends in lake condition over time, and ecological functioning.

Routine water quality sampling was conducted by LOPA volunteers at two sites in 2022. These same sites have been sampled for more than 20 years.

Visits were made nearly bi-weekly from mid-May to mid-October.

Depth profiles of temperature, dissolved oxygen, and pH through the season are used to assess the thermal stratification process from spring turnover, through summer stratification, and into the beginning of fall turnover.

Onota Lake is a typical ‘dimictic’ lake, meaning that the entire water column mixes from top to bottom twice per year, in the spring and in the fall.

Summer stratification produces a warmer (lighter) upper layer, or ‘epilimnion’, a colder (denser) bottom layer, or ‘hypolimnion’, and an intervening layer (‘metalimnion’) through which the temperature declines rapidly with increasing depth (this rapid decline is called the ‘thermocline’).

The timing, duration, and temperature profile of summer stratification have major implications for the overall functioning of the lake. Most importantly, a loss of dissolved oxygen over time in the deepest layer affects nutrient cycling, habitat for fish and other animals, and potential growth of cyanobacteria.

The plots below show the temperature profiles for each site visit at the two routine sites. Note that the depth range on the graphs is the same to help compare the sites. However, the maximum depth at site D-2 (north basin) is about 25 ft, whereas that at site D-6 (south basin) is about 60 ft.

The progression from spring turnover to summer stratification can be clearly seen in these graphs. The deeper site D-6 shows a classic pattern of summer stratification, with three distinct layers (see plot E in the figure below). In contrast, the shallow depth of site D-2 prevents formation of a cold hypolimnion so that we see only two layers: a warm epilimnion and a metalimnion through which the temperature declines rapidly until it meets the lake bottom (see plot B in the figure below).

The breaking up of summer stratification can be seen by late September (plots C and F in the figure below). Fall turnover was complete at the shallower site D-2 (north basin) as of the last visit on October 11th (plot C). However, complete turnover had not yet occurred as of that date at the deeper site D-6 (north basin; plot F). 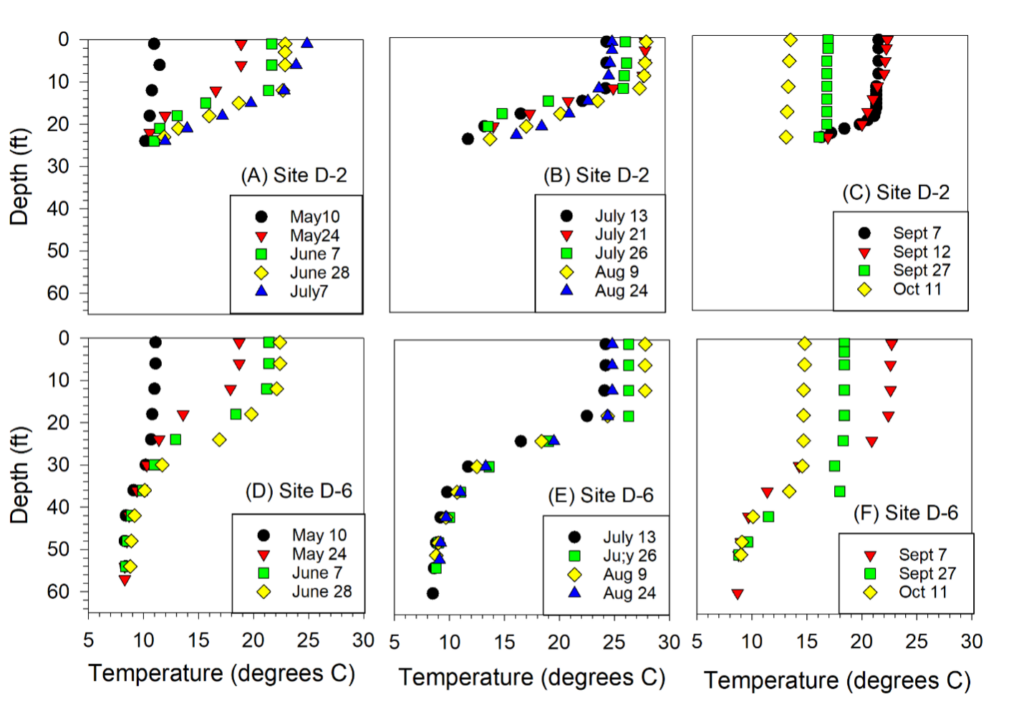 Sufficient dissolved oxygen (D.O.) is critical to the health of fish, sensitive macroinvertebrates, and the overall ecosystem of Onota Lake. Although oxygen requirements vary among Onota Lake’s fish species, a minimum D.O. concentration of 5 milligrams per liter (mg/L) is the general ‘rule of thumb’ requirement for a healthy fish assemblage (this is also the Massachusetts state standard). Low D.O. has other negative ecological effects such as facilitating release of phosphorus (which can encourage algal blooms) from the sediments.

The figure below shows the changes in D.O. with depth over time at site D-2, in the north basin. The upper 12-15 feet or so of the water column at this site had ample D.O. (at least 5 mg/L) throughout the 2022 season. 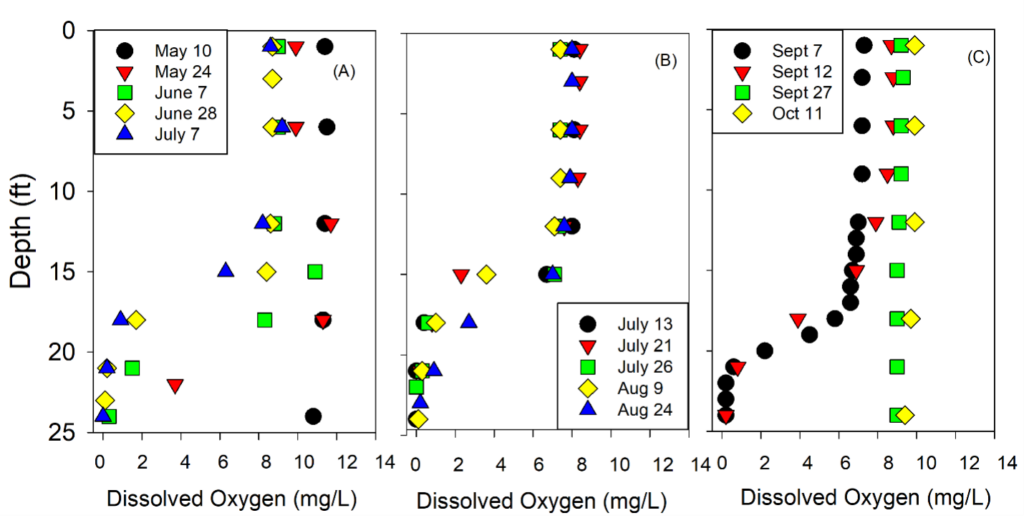 The next figure (below) shows the changes in D.O. with depth over time at site D-6, in the south basin. Here, the upper 30 feet or so of the water column had ample D.O. (at least 5 mg/L) throughout the 2022 season. 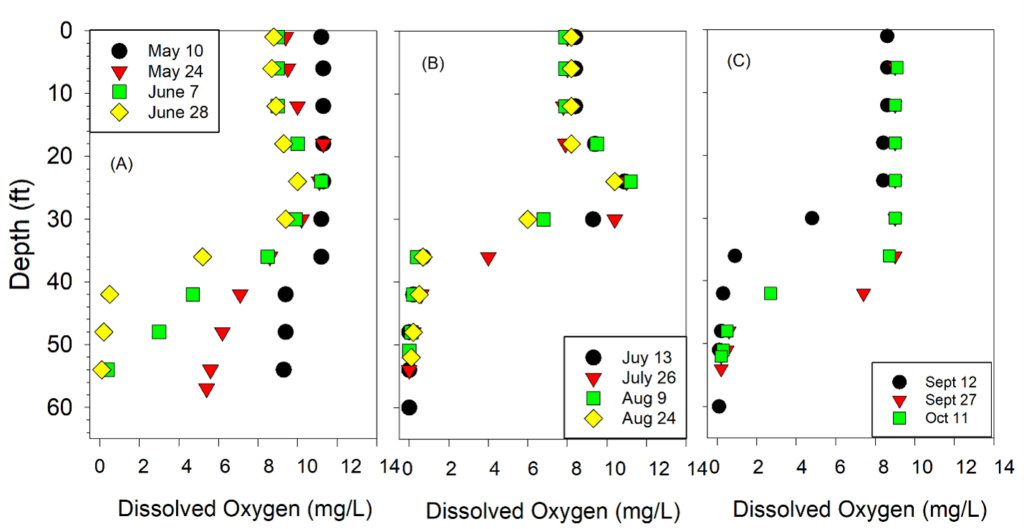 Transparency is an indicator of amounts of organic (living and non-living) and inorganic particles suspended in the water column, including algae (phytoplankton), bacteria,  sediment, decomposing plant and animal material, and other suspended particles.

Transparency has been measured worldwide for more than 100 years using a simple device called a ‘Secchi disk’, and this is what is used in Onota Lake. Measurements were made by lowering a standard black and white Secchi disk until it could no longer be seen and noting this depth, then slowly raising and noting the depth at which it reappeared; the Secchi depth was recorded as the mean of the two measurements.

The plots of Secchi depths, below, show the greater transparency overall of the lake’s deeper south basin (site D-6) than the shallower north basin (site D-2), as well as an expected pattern of temporal change at both sites. 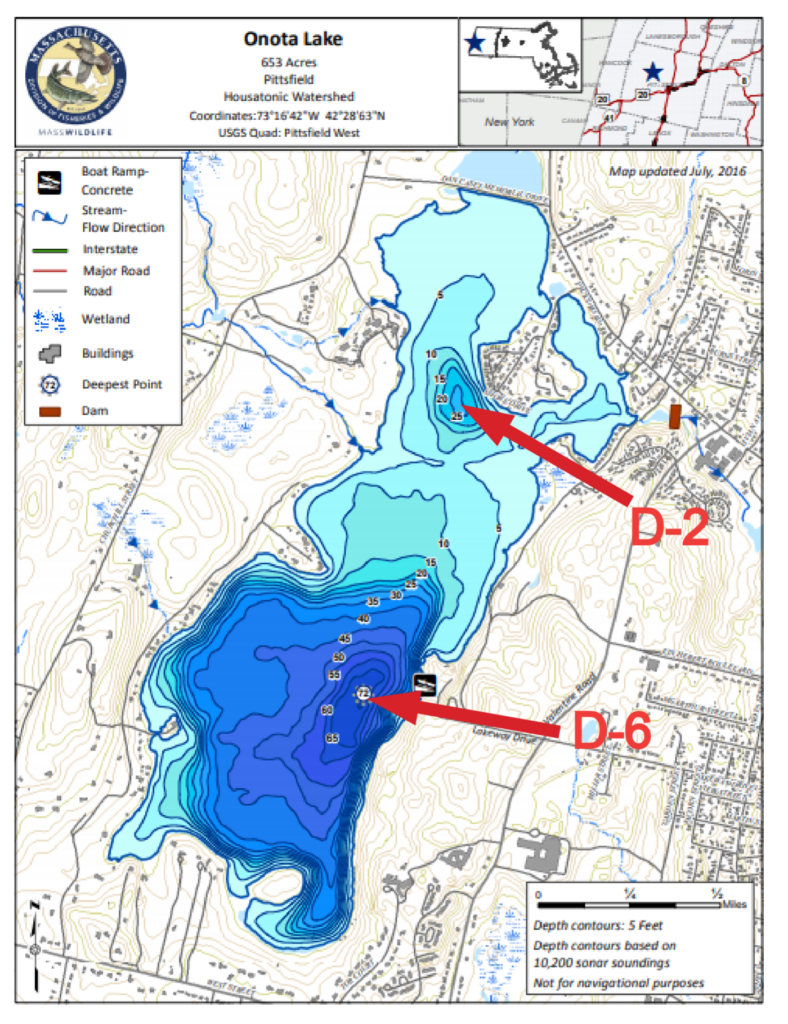 Base map from Massachusetts Division of Fisheries and Wildlife